Documentary heritage submitted by China and recommended for inclusion in the Memory of the World Register in 2011:

Ben Cao Gang Mu (本草纲目) (Compendium of Materia Medica)) is is the most complete and comprehensive medical book ever written in the history of traditional Chinese medicine. Compiled and written by LI Shi-zhen (1518~1593), a medical expert of the Ming Dynasty (1368-1644) over a period of 27 years. The first draft was completed in 1578 when Ming China was at its imperial heyday

The compendium lists, analyses and describes all the plants, animals, minerals, and other objects that were believed to have medicinal properties. The compendium in effect epitomizes the pharmaceutical achievements and developments of East Asia before the 16th century. On the basis of his predecessors’ achievements in the pharmacological studies, Li contributed further by supplementing and rectifying many past mistakes and misconception as regards the nature of many medicinal substances and causes of various illnesses. The compendium in fact heralds the dawning of modern pharmacological studies.

The Ben Cao  Gang Mu is still generally considered the most authoritative premodern Chinese materia medica. According to one of the worlds leading Chinese herbal pharmacognosists, EJ Brand, there was a little mention of the use of the flower after this time in China.

Here is the entry:

As you can see, there was a limited range of indications for cannabis flower in this premodern text. The text refers to invading wind. Wind patterns in Chinese medicine often correspond with sudden-onset neurological conditions. So, that appears to align with at least one well-known modern use of CBD — the treatment of seizures. I’ve calculated the dosage based on the traditional Chinese system of weights and measures. It comes to about 1 g of dried flower that was heat-treated and taken orally in pill form. Because it was heat treated, we know that the cannabinoids were converted. There is no mention of dose frequency, but it is likely either BID or TID, as that is the norm in traditional Chinese herbalism.

The first question that comes to mind is whether there would be enough CBD in one gram of dried herb to stop an acute seizure (or prevent them if taken regularly 2 to 3 times per day). I don’t know the answer to that question, but it’s probably out there in the wild. 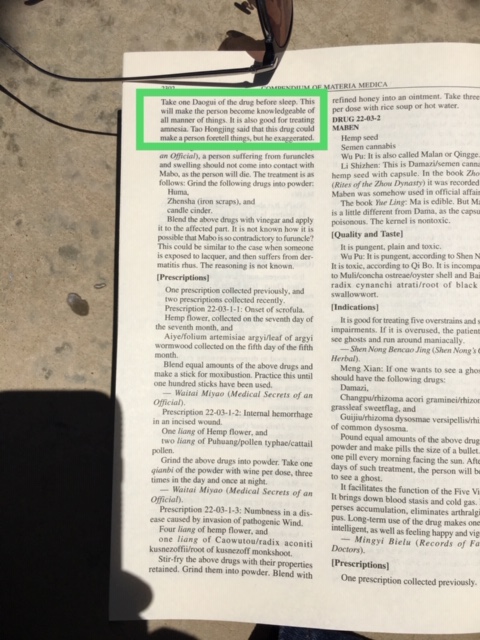 Historians of Chinese medicine generally agree that the term Scrofula refers to tuberculosis. The inclusion here might refer to an immune-stimulating effect, something attributed to CBD.

The passage highlighted above is particularly interesting. The author describes the function of enabling one to foretell the future and then almost immediately dismisses it. The text also indicates cannabis (curiously) as a cure for amnesia. This would probably come as surprise to many who might consider the psychoactive portions to be more likely to induce forgetfulness. EJ Brand‘s research suggests that if any of the uses of cannabis in pre-modern times in China were related to cannabinoid content, it appears more likely to have been CBD than THC.

Interested in learning more about the use of cannabis in Chinese medicine? Read about the Penetrating Divine Illumination.

The Ecology of Health

The defining characteristics of functional (and traditional Chinese) medicine

If you enjoy this site, you may also enjoy ToddLuger.com